I am hard wired.

Using wireless instead of hard wired?

My Send Buffer Size is bigger than yours.

and my client is behind several layers of routers while you appear to directly connected to the vz router.

What Viafax999 said. You can try to reset your router, but It does not look like a router issue. I would not think it is a PC optimization issue unless you have something bad on your computer. You may need to contact tech support unless you are wireless and not tried a hardwired connection. Make sure you test hardwired.

Make sure you are hardwired

Make sure you re-run the Verizon Optimizer

Make sure you are testing at http://speedtest.verizon.net 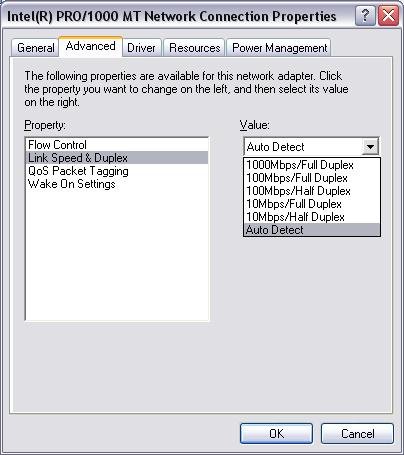 then you should see your NIC devices,   double click on your NIC (may say Local area connection 1 or 2)

then go to properties

and on properties you will have a configure button under general.  click that

then go to the advanced settings, and under property, look for link speed or duplex mode (you are going to have to hunt around here, because different manufacturers name it different things)    switch the setting to 100baseT or 100 mb half duplex (not full duplex)

hit ok, or save and keep hitting ok or save until you get all the way out, and then re-test.

Remember to REBOOT after you make that change, and then test your speed again

If that doesn't work, then do a couple traceroutes, and let us see the results.

Once again this time on my laptop.wireless.

Web100 reports the Round trip time = 32.92 msec; the Packet size = 1452 Bytes; and
There were 77 packets retransmitted, 215 duplicate acks received, and 246 SACK blocks received
The connection stalled 8 times due to packet loss
The connection was idle 2.37 seconds (18.23%) of the time
This connection is network limited 98.5% of the time.
Excessive packet loss is impacting your performance, check the auto-negotiate function on your local PC and network switch

Once again this time on my laptop.wireless.

As stated by various people above, you really should be testing hardwired, not wirelessly. This eliminates wireless interference as a culprit.

--
If a forum member gives an answer you like, give them the Kudos they deserve. If a member gives you the answer to your question, mark the answer as Accepted Solution so others can see the solution to the problem.

"All knowledge is worth having."
Reply
0 Kudos
Highlighted

I'm having the same problem. Ran the optimizer, I am hardwired, I get slow speeds with wireless also on an ipod so it has nothing to do with the computer. Most likely the router or I am being capped/limited. I set the router to default settings and unplugged for several hours and nothing worked.

This is about the third time it's happened after downloading medium sized games 5-9gb's off steam.

If you're slow and wireless, then you really should change the wireless channel.  You can do that in the router.   open a browser, and go to  http://192.168.1.1  user name is admin.  and the password is most likely the serial number found on the service tag of your VZ router unless you changed it.  (It is case sensitive, and it is found by the UPC bar code on your router)

Once you login succesfully, go to the top and hit wireless, then on the left basic security.   then go to option 3 which is channel
1, 6 and 11 and are the only channels you should try.
So it will likely be set to auto, change it to 11 and put the check for keep settings even after reboot (Directly under the channel) and then hit apply.,
after you hit apply,  test your connection out, if you notice a difference, leave it like that until the problem happens again, and if it happens again, go back into the router, and try channel 6,     test it out.  and then finally 1 if the first two don't work.
Also take a look at page 2 of Actiontec's Wireless PDF File.  It gives you some idea's with regards to position and orientation of where the router sits and how it can best be positioned for maximum coverage.
Reply
0 Kudos
Highlighted

If you use the test at ndt.anl.gov, there are  tabs for more details and for statistics. Generally there is pretty good information in one or both tabs about where the problem is.

You haven't mentioned if you are running Vista or Windows 7. Both dynamically alter buffer based upon demand, and the defaults are generally much too small for FiOS speeds. My experience with a Windows 7 machine is you often have to run the rest 3 or 4 times to get the maximum performance as Windows 7 increases the buffering available.

If you are not running Windows 7 or Vista, you do need to run the Verizon High speed optimizer to get full speed out of a FiOS connection.

I have noticed that over the past 4 weeks, the 35/35 symmetrical service I have has been acting like it's half duplex instead of full duplex.  Nothing has changed, but all of sudden if I was downloading at 5MB/s, my uploads had been able to be the same speed, but now I get a total of 5MB/s.

I called VZN and they reset my circuit, which helped for about 6 hours.

I've done all the troubleshooting I can think of. (Resetting router, by passing router, powercycle ONT, use different OSs (Win7, WinXP, Ubuntu 10.04,) ran speedtest from Verizon, speedtest.net, speakeasy.net, optimum online, and a few others.

The problem with these speedtests is they test the upload and download independently.  Anyone know of a test that runs both at the same time?

I've run the Verizon optimizer on all computers.  I've run basic cable diagnostics on all every patch cable in use.  they all come up clean, no shorts, report proper length (BTW, the longest cable I'm using is 35", well under the 100 meter max for a cat5e cable, call cables are cat5e or cat6,) all 4 pairs matched properly.

I have not made any changes to the hardware or network design.  I don't use the built in wireless because it's totally inadequate and Verizon won't send ActionTech Rev G routers (that have true N mimo wireless and a gigabit switch built in) to existing customers, only new installs or upgrades to the obnoxiously high priced 100/35 service.  I have a Rev F router.

Due to another problem I was having with my DVR port forward becoming disabled all the time, they sent me a new router, but it's a Rev E.  So before I switch, I need to see the specs for Rev E and make sure I'm not losing any functionality.

But I don't think it's the router, or solely the router.  Because when I bypassed my router (which of course you can only do with the help of tech support because they have to release the dhcp/mac lock they use,) I was still unable to get full speeds up and down simultaneously.  The speedtests do, and did when bypassing the router, show proper bandwidth and ping times.  But that's no solace when I'm exchanging 100's of gigs of video, audio and graphic files with production companies and like those commercials from not that long ago, they don't want to be sitting there waiting and waiting and waiting.  I will regularly need to and receive ~50gb files for editing and review.  Up until a month ago, this was no problem.

So, seeing this thread, I'm wondering/guessing that VZN changing some basic bandwidth controls when they rolled out this 100/35 service that has actually taken bandwidth from existing users and maybe even set their mid and core routers to half duplex in order to accommodate the 100 down speeds for these new users (both residential and commercial now.)

I hope I am wrong.  And if anyone has any suggestions for me to try, please let me know.  VZN determined there was nothing wrong with the circuit or lines to my apartment, but reset it anyway, which, as I mentioned, helped for a few hours.  I have removed all extraneous network devices (printers, WAPs, switches) and am only using the 10/100 built in switch.  The next thing for me to remove from the network are the computers, but that would kind of make having the service a waste of money.  I have, however, been able to run all the tests vzn requested as well as my own diagnostics having been a network engineer for 10 years, with only one device connected and only two Ethernet cables in the router (the one to the ONT and the one to my computer.)  All the same results.  And I did this with 2 desktops, both quad core i7 with 16gb of ram and two laptops (older but have GB NICs.  )  BTW, I have tested various combinations of statically assigning speed/duplex to the NICs as well as the ports on the router.  Best results should have been with both router and device set to 100/full duplex.  But showed no difference than when set to auto or 100/half duplex.  (perplexing, no?)

So as I said, any advice, suggestions would be appreciated and if anyone knows of a reliable speed test site (I live in New York City,) where I can test the symmetry and full duplex, please let me know.