My 50Mb Verizon connection can not even play a Netflix video in SD without buffereing.  This is just unaceptable since I can go a mile away to mother-in-law who has cablevsion 15Mb sevice and play in 1080p HD!  Amazon Video, Vudu, Target Ticket, MGo and of course Redbox don't have any streaming issues with HD videos.

It's not just me but many Verizon FIOS customers.  See the link below for Netflix's rating ISPs which Verizon FIOS is just in middle?  I'm not paying for middle teir service especially when Cablevision's much cheaper lowest teir is much better for streaming Netlix.

Considering Verizon Redbox plays so well if this not resolved I plan to petition the FCC despite the recent ruling FCC Can't Enforce Net Neutrality.. I think it will be overturned when it's clearly showing ISPs are allowing competior streaming to degrade while at sametime heavily investing in infrastuture for their own streaming.

Verizon just needs to take resonsibilty by adding one or more local netflix CDN server farms.  This just needs to be fixed or support will have to advise people to run VPN or just cancel Verizon FIOS and get a service that is willing resolve bandwidth issues.

STOP SLOWING NETFLIX DOWN !!!!!  I pay a lot of money for my Verizon FIOS Triple play...   Now, I expect to get what I pay for.  Verizon,  please understand that I love the idea that you are not going to discriminate against the apps that I choose to use over FIOS... Right,  Do you really want to limit my freedom by rate limiting web sites like NetFlix????   You will lose me as a customer if my Netflix continues to slow down like it has been over the past few weeks.   Please do not rate limit my freedom!!!!

NETFLIX IS SLOWING DOWN - WHY??

Verizon,  Please don't be tempted to rate limit Netflix traffic!!  I find it suspicious that my Netflix is taking a hit now that Netneutrality seems to have been discarded by the powers that be.  I would like to see Verizon lead all of the providers in issuing a proclomation and guarantee to its customers that it will protect our freedom and access to the internet applications we choose to watch and use.  If you are limiting applications access based on protecting your commercial interests, then you are effectively violating my right to access what I want on the internet.  Please take a stand on this issue and promise your customers that you will not selectively filter out what you don't like... 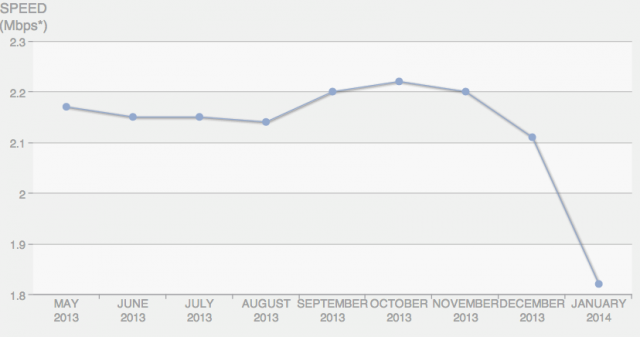 Boy you got that right..  Bode Miller wouldn't touch that.

You all might be insterested in this article "Netflix Doesn't Think Verizon's Throttling Video Streams" at this link: http://www.dslreports.com/shownews/Netflix-Doesnt-Think-Verizons-Throttling-Video-Streams-127717.

Knowingly  NOT upgrading saturated infrastucture results in the exact same result to paying customers as throttling !.. a 50Mb verizon service delivers slower Netflix speed then a 15Mb cablevsion service.  I'm not just making this up I go to to my mother-in-laws (1 mile away) and her 15Mb Cablevision streams Netflix HD with no buffering!   I don't care what the cause of the problem is Verizion needs to fix this

Netflix is 1/3 of all US internet traffic.  1/2 of it during prime time at night.  This is not a case of a few ports being saturated and no one noticing.  FIOS is fully aware of the impact of their inaction.

Could I interest you in Redbox perhaps?

Exactly given Netflix is 1/3 of all traffic Verizon should be begging Netflix for the local CDNs that Netflix pays for!  Why does Verizon refuse to install the local Netflix CDN systems?  Possible reduction of Rebox and Flexview $$$ pouring in is the only reason I can think of?