Mobile solutions
Home solutions
Have a phone you love? Get up to $500 when you bring your phone.
$500 via Verizon e-gift card (sent w/in 8 wks). Activation of 4G LTE/5G phone on One Unlimited for iPhone (all lines on account req'd on plan), 5G Do More, 5G Play More or 5G Get More plans req'd. Device must remain active for 45 days. $500 charge back if service cancelled w/in 12 mos or eligibility req's are no longer met. See vzw.com/bring-your-own-device for details.
end of navigation menu
Community Sign In/Registration
Turn on suggestions
Auto-suggest helps you quickly narrow down your search results by suggesting possible matches as you type.
Showing results for
Search instead for
Did you mean:

Ethernet is connected via 3ft Cat7 cable (yes, overkill) from router to my PC.

a) on Ethernet: some sites and some network-reliant programs will fail to load/start when on LAN

b) on WiFi: everything works

This problem is reproducible. It does not seem to change from day to day, so there are a few sites that I know always give me trouble. Also trying to launch Discord chat app will not work on Ethernet. When a site fails to load, it usually is stuck on a blank page with the status message at the bottom of the browser window reading "establishing secure connection..". There have been one or two cases where the header of a page will load, but the body of the page will not.

I am not using any other third-party antivirus software

I have tried changing the DNS servers to use Google and OpenDNS. It is clear that DNS is not problem.. the same behavior happens regardless

Within the router settings at My Network -> Network Connections -> Advanced -> then select "Edit" next to "Broadband Connection (Ethernet/Coax)" -> Settings, I have tried unchecking the box next to "Internet Connection Firewall". This has no effect either

Here is a screenshot of the Network Connections in the router settings, just in case something looks incorrect to you. 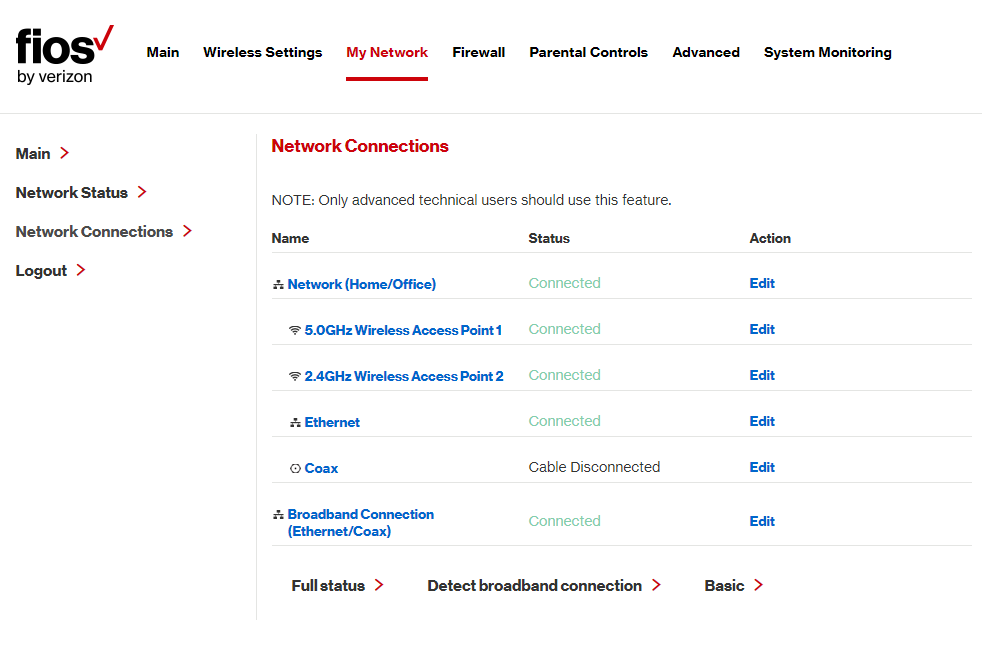 Perhaps the driver for the Aquantia needs updating?

I also noticed that on your router settings you're running at 2.4 rather than 5.  Is there a reason for that?

I've found Chrome to be almost impossible lately and often find a blank screen.  This seems to be the result of Chrome not liking the security settings of the site - or - Chrome's security settings are blocking the page.  If you go to the left icon on the url and right click it will bring you to security settings for the page in question.  I set them all to "allow", reload the page and it usually works.  But I'm getting really tired of Chrome after all these years.

It may be just an issue with Verizon's default DNS server. Try clicking edit on Broadband Connection (Ethernet/Coax) and go to the drop down for DNS servers and change from obtain automatically to use the following  and change the DNS server to say Google's which is 8.8.8.8 and see if that works.

I noted in my original post that Ive already tried changing the DNS, but does not seem to change anything. Ive tried both the google DNS servers and also OpenDNS servers.

Also I should mention, my situation is somewhat similar to this other thread that was solved last year. However, the difference in my case is that I don't have a global loss of internet, only situation/site-specific. Here is the other thread I found before posting here:

The device in the basement is a optical network terminal, or ONT.

Try using a CAT5e or CAT6 cable.  While a CAT7 cable should be backwards compatible, there could be something in the non-CAT7 equipment that doesn't play well with them.  It's an easy test that is worth doing to rule out any cable or port issues.

I was using a cat5e cable initially (from gateway to PC). The cable the ionstaller tech used to run it from the ONT to the gateway on the first floor, that cable is Cat5E (figured theyd use Cat6 cable for gigabit customers but what do i know)

Also im reluctant to think the issue is cable related, since the connection issues are not global.

I was using a cat5e cable initially (from gateway to PC). The cable the ionstaller tech used to run it from the ONT to the gateway on the first floor, that cable is Cat5E (figured theyd use Cat6 cable for gigabit customers but what do i know)

Also im reluctant to think the issue is cable related, since the connection issues are not global.

Do you have anything else plugged into the LAN ports or another device you can try hardwiring for testing purposes?

No, nothing else plugged in.

I dont have another device right now that i can plug in for testing purposes. Although I could bring home my laptop from work and give that a test. I was also considering a fresh install of windows (sorta been wanting to do a clean install for a while now, irrespective of this problem).

I'll update this after Ive tested other device and/or reinstalled windows on this PC.

well, just did a 100% clean install of windows and it didnt take long to realize that the same problem persists. So I'll bring my laptop home from work on Monday and see how that behaves.

just in case anyone is wondering, one site im able to reliably use for testing is https://biorender.com/ .. this site loads perfectly, but when I try to login, it attempts to bring me to https://app.biorender.com/signin which is when the trouble starts. It's a blank white page with "establishing secure connection" at bottom left in the status box.  As soon as I unplug ethernet cable and connect over wifi, poof like maging it loads instantly. I wish I knew more about different sites, certificates, protocols, etc. and maybe I could figure out whats different about the login page.. but i can't. I've tried to run a ping command on the signin page but that fails too. Tried traceroute but i think i need an IP for that, which I don't know. Anyways, I'll update more later. Surely someone out there must know something

I just decided to check out my device in the router settings. I found my PC and selected "View Device Details" (image 1 below) 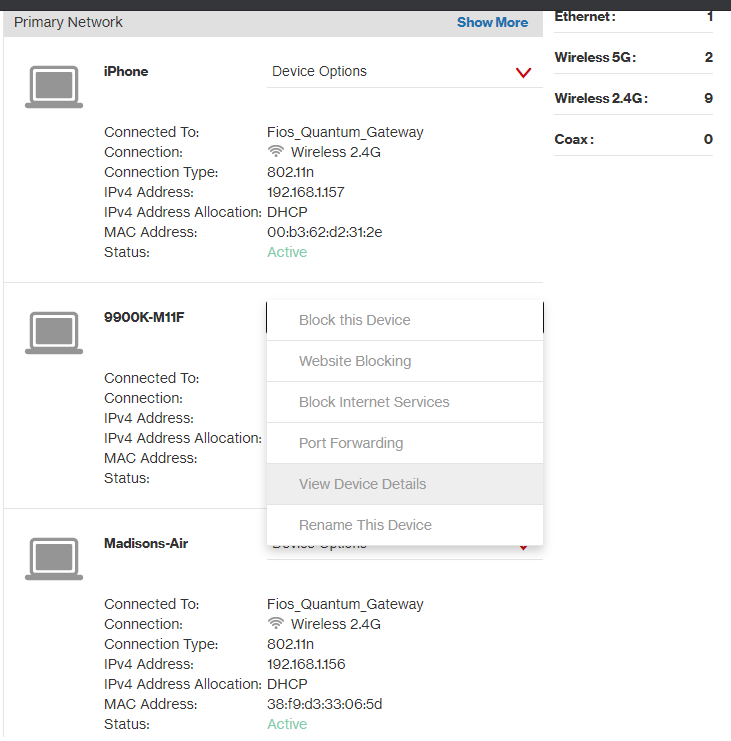 By selecting "View device details" I was brought to this page here (image 2 below). Does anything look off/wrong here? What is "Bridge" for "Network connection" ?? 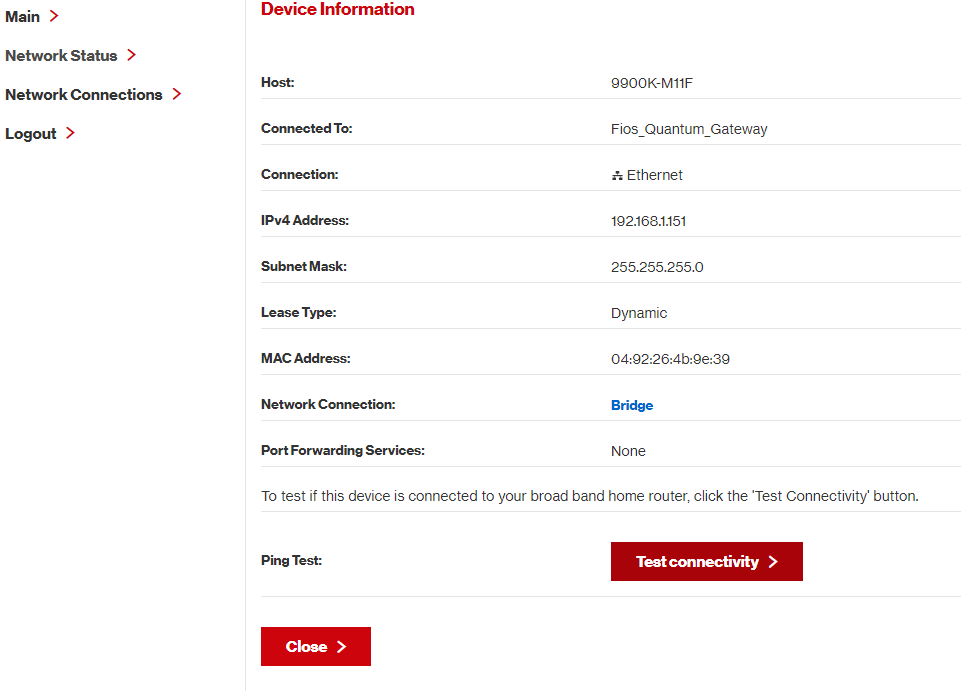 So then I saw this "Test connectivity" button and decided to give it a go. When I run that test, this is the result (image 3 below) 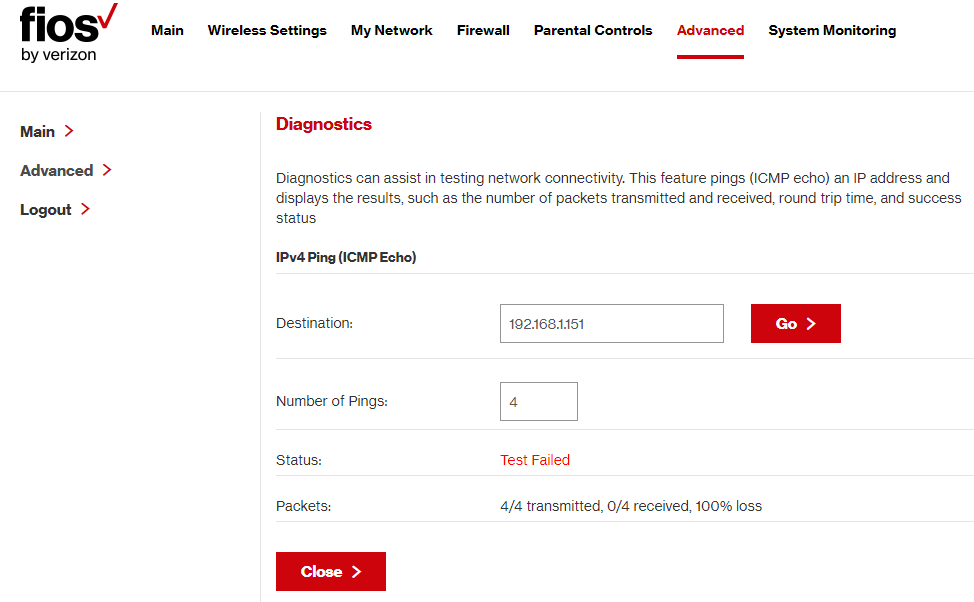